My personal experience transitioning from PayPal to eBay Managed Payments as European seller on eΒay.com:

Once eBay Managed Payments became mandatory, I attached and verified my Payoneer bank account for payouts. After a while, on July 9th, I got a payout withhold without prior notice and a message that was requesting for ID and a bank statement for verification once again. 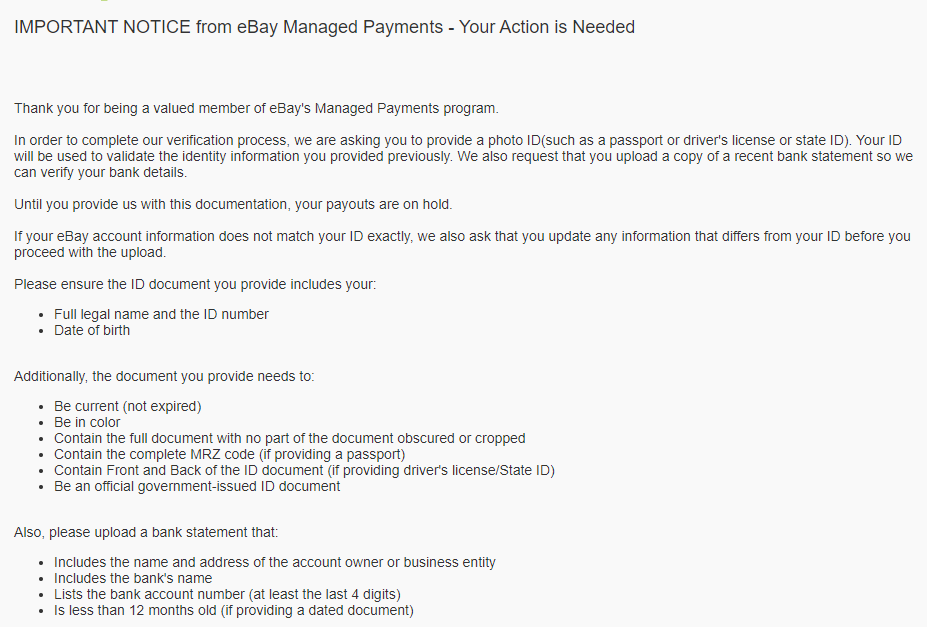 From that point on, a verification ordeal started that lasted about 3 months. Late responses, vague answers, misinformation, lack of knowledge and -inadvertently?- lies, mostly from eBay representatives, made me think that Payoneer was to be accepted as bank account, so I kept trying to verify it for about 2.5 months. After all, it was already working prior July 9th and eBay has recently partnered with Payoneer for processing the Managed Payments payouts.

However, this direct link with Payoneer, is not enabled for all the countries. So at this moment, some countries have been enjoying payouts seamlessly and easily in their Payoneer USD account, and most importantly by saving tons of conversion fees, since they receive the currency the customers pay with (USD)!. For European sellers (that buy and sell in USD market), eBay automatically converts any paid currency, to EUR for a ~3% conversion fee, then sends it to the linked EU bank account. Then the seller has to convert the EUR to USD again for purchasing the merchandise. eBay does not provide any way around this.

After I realised that they ‘re not going to accept Payoneer, I wondered which banks they do accept. Each time we contacted eBay’s representatives regarding, their answers were once again mostly different between each other and rather vague. I collected some chats from various colleagues with the same problem. 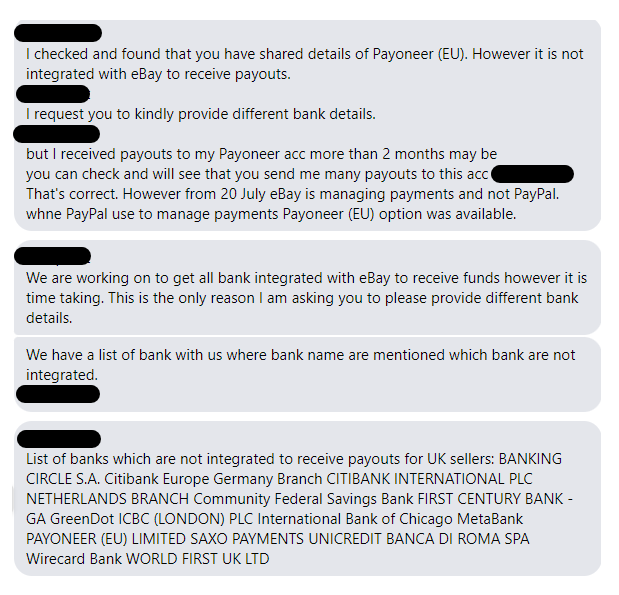 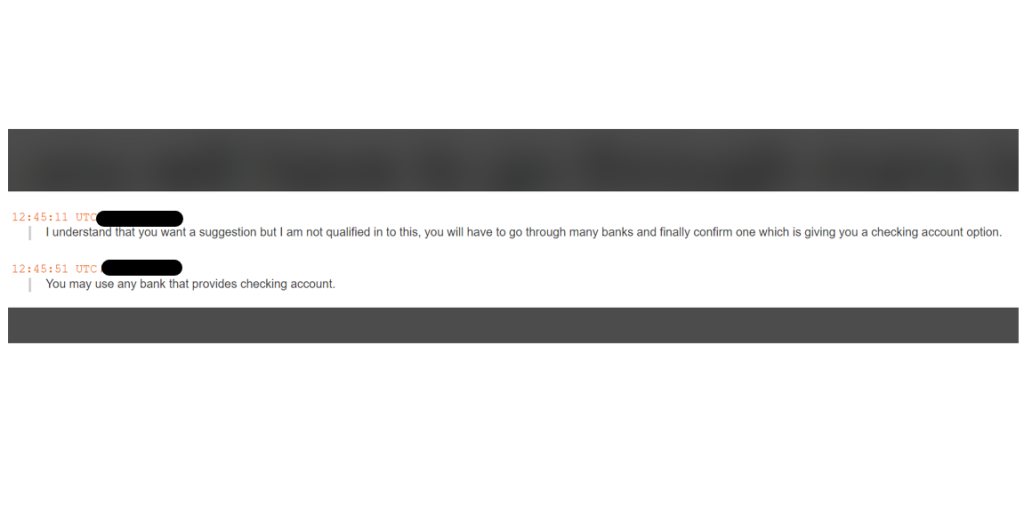 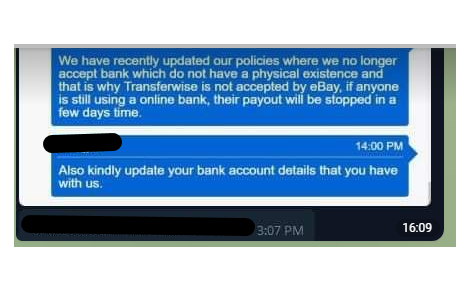 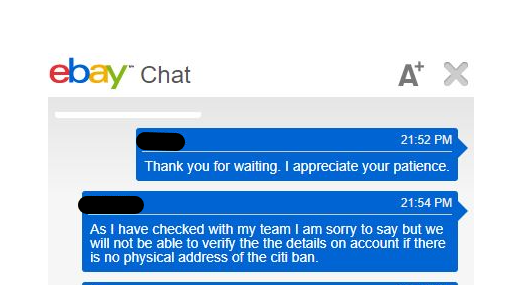 eBay just mentions that the bank account must be a checking one and that it can take up to 30 days for it to become verified.

After some tryouts with various banks, me and colleagues found that the “traditional high-street banks” seem to work, while Fintechs such as Wise, Revolut, N26 PY and more could become rejected or even trigger a suspension (read on).

Once I finally found a bank that suited eBay (first days of October), they verified my bank account and few hours later they temporarily restricted it with MC011, requesting for specific actions. 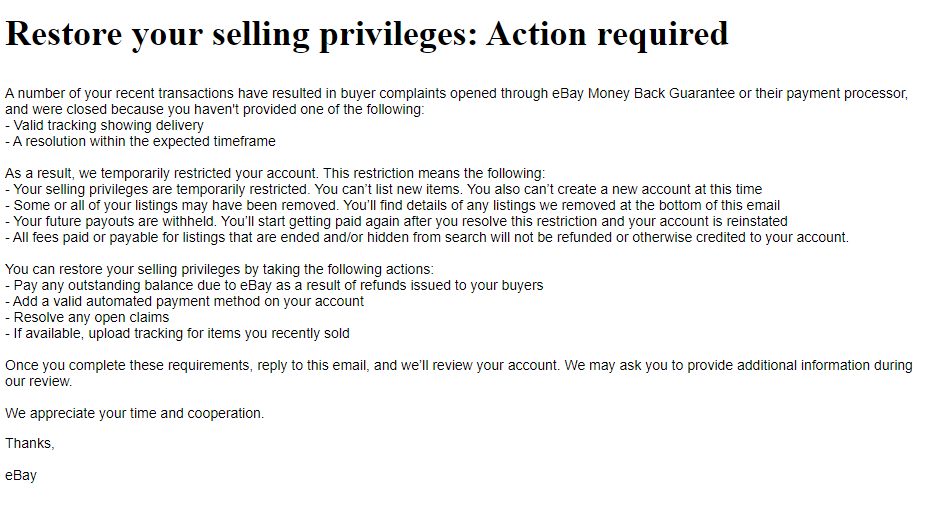 This restriction seemed erroneous and unjustified, since none of the recent transactions could have any of those two issues eBay mentioned. The transactions were about 1 sale/week since August, with 96% valid tracking numbers and 0% cases/defects.

The only thing that hadn’t been setup, was the automated method. That led me to the conclusion that this was probably the reason of this restriction. After updating automated method and letting them know, they further restricted my account with MC011, this time requesting invoices, ID and more. 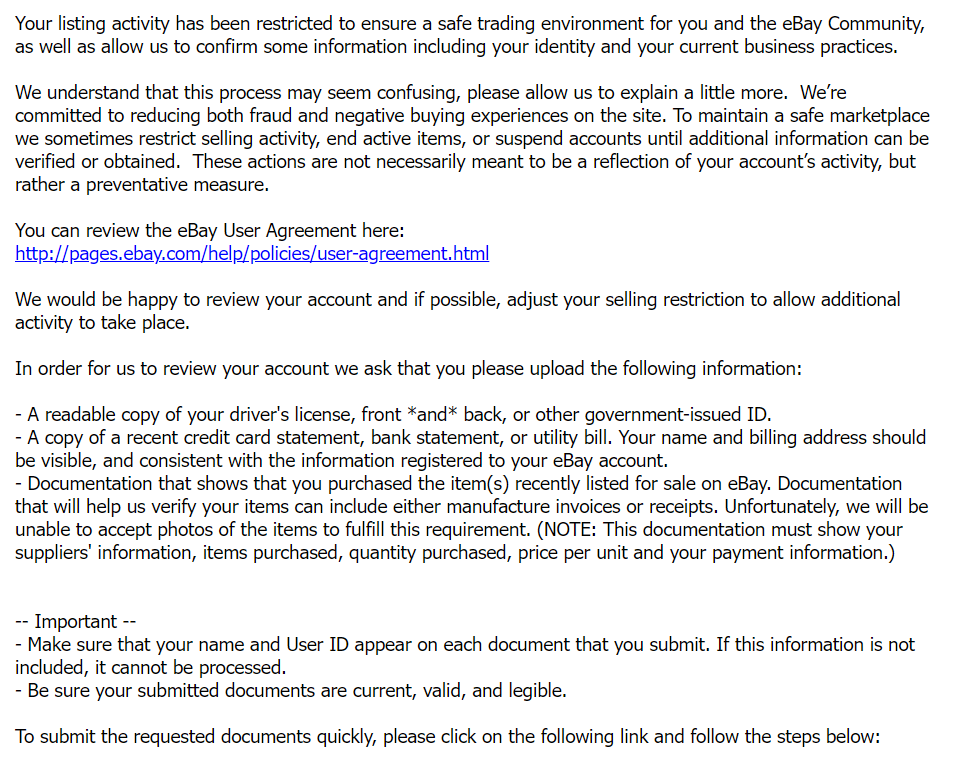 A day later and before I send any reply, the withheld funds (since July) were released as payout.

Prior sending any documentation, I sent them a message telling them that my account is already fully verified. 2 days later they reinstated the account.

P.S: As I am being informed by colleagues, accounts that have become reinstated, are more likely to be suspended again. Be prepared to be able to provide as much documentation as possible.